What is Human Trafficking?

Human trafficking is the illegal trading of women, men, or children for exploitation or commercial gain. It is a serious violation of human rights and considered a modern-day type of slavery that affects millions worldwide. It can take many forms, including forced labor (servitude), sexual exploitation, prostitution, forced marriage or adoption, and the removal of human organs for lucrative trade.

In 2005, the International Labor Organization (ILO) reported that approximately 12.3 million people worldwide are in involuntary labor or forced servitude (including child labor and sexual servitude) at any one time.

As defined in the Trafficking in Persons Protocol, there are three primary elements to human trafficking: 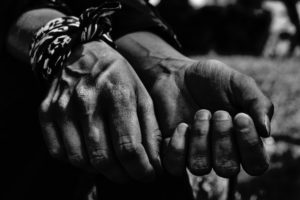 Fact check: This modern-day form of slavery affects nearly every country in the world. Hundreds of thousands of people in the United States are affected each year. That includes, but isn’t limited to, American citizens, permanent residents, and documented and undocumented workers.

Fact check: Human trafficking is a crime that affects men, women, and children of all ages in various forms. The exploitation encompasses both labor trafficking, as well as sex trafficking and other exploitative practices such the involuntary removal and selling of organs for profit.

Myth #3: To qualify as trafficking, there must be some use of physical harm or force of one person against another.

Fact check: As defined by the Trafficking Victims Protection Act of 2000, trafficking doesn’t have to involve violence against another human being. Acts of coercion, psychological abuse, fraud, and abuse of legalities can all qualify as equal parts of this crime.

Myth #4: All of human trafficking involves some kind of transportation—whether by car, plane, train, etc.—across borders.

Fact check: Transportation is often involved in this type of modern-day slavery. However, crossing borders is not technically required, by definition, to be part of the process. Smuggling is abuse of borders; human trafficking is abuse/exploitation of one person (or people) for another’s gain.

Myth #5: Victims of human trafficking will seek out help and identify as victims.

Fact check: In reality, many victims do not identify as such. Shame, distrust, trauma, social withdrawal, and a host of other factors come into play. Years of psychological abuse also may take a toll on a victim’s ability to trust authorities. Learn more about the top reasons trafficking victims can’t leave.